In this post I am going to show some initial work I did in the last day to deploy Jupyter Hub in Kubernetes with user auth based on LDAP.

I wasn't that much work considering that Jupyter Hub already had support for LDAP user auth and the modularity they have is amazing. It was quite straight forward to write a new spawner based on the existing one on the Jupyter Hub github org.

All the code in this post is at danielfrg/jupyterhub-kubernetes_spawner. Specifically in the examples directory.

I consider this a nice example of a more production ready Jupyter Hub deployment being based on LDAP that for good or bad is everywhere and Kubernetes to deployment of the single user notebook servers.

Something I don't talk is SSL certificates because its very well supported on Jupyter Hub and I think there is enough information about them on the Jupyter Hub docs and online. And yes, I was lazy to do it :)

Basically the only requirement to get this running is a Kubernetes cluster (credentials) and time.

By far the best way to get a Kubernetes cluster is to use the Google Container Engine to create one.

From this point I am assuming you have one.

LDAP will be the user directory that we are going to use authenticate in Jupyter Hub. Just as an example we are going to deploy openlpad and phpldapadmin as an UI also in the same Kubernetes cluster.

In the example directory I provide an ldap.yml file that has a simple kubernetes deployment object and one service to expose the phpldapadmin UI.

The deployment consist of only one Pod with two containers.

Second container is phpldapadmin, disabling HTTPS (so port 80) and the LDAP host being localhost since its the same Pod:

Finaly one simple Kubernetes service to expose the phpldapadmin UI:

To deploy everything just need to run:

After that just wait for the Pod to be ready and the service to give you a public IP:

The default user is admin with dc=example and dc=org (in LDAP lang that means DN=cn=admin,dc=example,dc=org in the user field) with password of admin.

Just as an example and to see how the auth works later lest create a couple of users.

First we need a Posix Group to place the users I chose: jupyterhub. Under that group create a couple of Generic: User Account the result should look something like this: 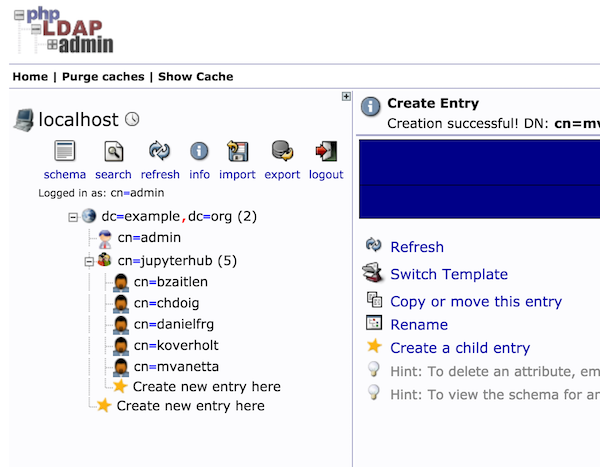 Thats all the work we need to do in the LDAP front.

Jupyter Hub basically consists of two parts the configurable-http-proxy which is a small magic utility and the actual Jupyter Hub.

When you start the Jupyter Hub it will start the configurable-http-proxy but I prefer to have each component in its own container like I show in the last deployment.

Before actually deploying the Jupyter Hub we need to create a Docker image that has the Jupyter Hub plugins for ldap and my Kubernetes spawner. We do this by extending the official jupyterhub/jupyterhub image:

The only think that is missing is fill the jupyterhub_config.py file with the missing values: Kubernetes auth and LDAP server location.

The missing values are:

Now we need to create the image:

Notice the tag of the container is gcr.io/continuum-compute/jupyterhub-kube:0.2 because I upload the image to the Google Container Registry but it could be a container on Docker Hub.

Thats it! Now we can deploy this image using the hub.yml deployment file.

This deployment consists of one Pod with two containers.

First one is the configurable-http-proxy:

Second one is the actual Jupyter Hub server. Notice I use the image I created and uploaded before:

Then two services to expose the APIs to the public

Use the file to create the deployment and wait for the Public IPs to be assigned:

In your browser go to the external IP of the jupyterhub service in my case: 130.211.158.251 and you should see the Jupyter Hub UI. Now you should be able to log in using any of the user entries in LDAP. 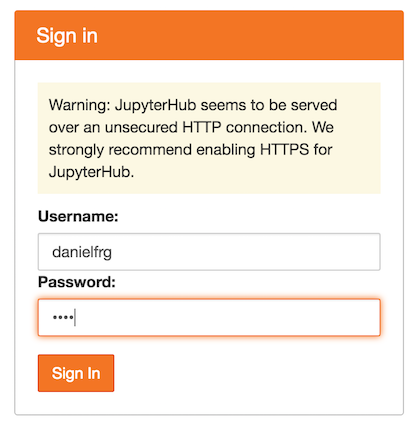 Note that it could take a minute to start the actual notebook server since the image that is pulled for the notebook is quite big but once the image is downloaded in the kubernetes cluster nodes it starts basically instantly.

As an experiment you can open an incognito window and login as another user.

Now you have two independent containers managed by Kubernetes and Jupyter Hub.

You can take a look at the running Pods now:

As expected stoping the server in the Jupyter Hub UI will stop the Pod.

There is more work to be done the main issue is that even when Jupyter Hub is supposed to be a permanent place for you notebooks the current setup will create a new container every time and the notebooks will be lost. The solution to that is to share a persistent volume with the containers.

Also the notebook Pod are not started with any replication control. It would be nice to start them with one so Kubernetes will restart them if they fail for any reason.

Finally there is some small things that can be done to make the config a little friendlier, for example the LDAP host can be exposed as a service and user Kubernetes service discovery to find the correct location. Probably trying to autodetect if the Jupyter Hub is being run in Kubernetes plus some sane defaults is the way to go.