This posts describes the implementation of a simple system to parse web pages using SEMAFOR (a SEMantic Analyzer Of Frame Representations) at scale. The system is mainly powered by salt and celery but also uses boto to create worker EC2 instances that parse the documents in parallel and luigi is used to describe the data pipeline in each worker.

The whole source can be found on github: danielfrg/semafor-parsing

The main idea is the following:

The diagram below tries to describe the system. 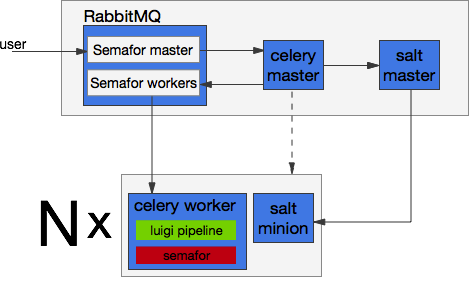 If you dont know what semafor is take a look at the example demo or this is just a basic example:

How to run this?

Very simple, only need to get running the master box. Other options are described in the project README but the easiest way is to use vagrant with the AWS provider, just need to run vagrant up --provider aws in the master directory, this is going to provision the master box.

When the box is ready just ssh (vagrant ssh) and:

Everything is ready now!

Get some URLS you want to parse and call the celery task semafor_parse(urls, n_instances=1). A helper script is provided in semafor/master/test.py

This are some screenshots I took while running it:

Celery log when the instances are provisioned via salt and the celery workers are connected: 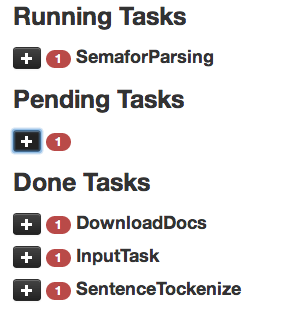 I used this opportunity to create a real-life example and keep learning (and loving) salt. At the same time I kept playing with celery and luigi that are 2 libraries that I love mainly because they solve very specific problems and are really easy to use.

The system took me a few nights and a weekend to build but I am very happy to the results, it was way easier than I originally though and what makes me even happier is that a few months ago I would consider this a 2/3 month project but I did it in less than a week. Definitely using the right tool for the every step is crucial.

I cannot image to provision the EC2 instances in other way that is not salt, the states are not easy to understand at first but they are really powerful. Also not relying on AMIs was a requirement, they are nice in some cases but not for reproducibility. Salt solves this.

When building this distributed systems using celery I am always thinking: "I should do this on hadoop...” And I love and use hadoop but the reason I did it using other tools is simple: sometimes is just to hard to do it on hadoop... specially when one needs to manage different steps, external tools and intermediate files such as the semafor output.

On this particular case one advantage is that semafor is written in Java so it should be "easy" to create some Hadoop job on Java, specially with semafor 3 (currently in alpha) that generates a handy .jar with everything in it. But to be honest I have no idea how to write a hadoop job in Java and I have zero interest in learning. I just want to use hadoop as a service, using pig, hive, MRJob or others. I didn’t want to mess with Java or the semafor source code I just wanted to use it and get the output, and in that case celery + luigi made it easy to develop.

Improvements to be made

I am always looking for opportunities to improve and try new tools, this are some thing I would love to do.

If you have any other suggestion, improvement or question leave a comment. Or did you ran this on the whole wikipedia and found something interesting? Let me know that to.