I love web-apps as the data is always in sync magically via the cloud, but sometimes I just need to access my computer via remote access to use some app, get some file or just to start downloading some torrents(shh). Remember/Email/Evernote a changing WAN IP is tedious that is were a DDNS comes in. My previous and old Belkin router had a bunch of options for DDNS s fortunately one was free; unfortunately and unbelievable my new Belkin N750 DB router  has only one option: Dyn which is not free :( So I decide to make my own DDNS  with Django  and with a free PaaS . The first decision was to select a PaaS and there are a lot of option currently; the list got narrowed because I needed a free  PaaS  for such a simple and small app that it is just for me. Some options were: OpenShift from Red Hat, dotCloud  which looks pretty good but not so simple to use and never understand if is really free or not, and other thousand options that are paid and free. I choose AppFog  because I recently read that they acquire Nodster (which I loved) and the service is so simple to use, just what I needed for this project.

The project consist on two parts; The first one is a Django server which stores previous IPs and acts as the DDNS domain and the second one is a python script that get the WAN IP and request the server to store it.

Create the app on AppFog (2 clicks via its web app), download the code via its CLI ( help ) and create a new Django app called ddns .

NOTE: AppFog currently runs Django 1.3.1 (current version is 1.4) be sure to look at the correct tutorial/docs on their site.

Since it is not possible to do an SSH connection on AppFog (to run commands from the terminal to create the users to access the admin web interface; wow 3 to’s on a single phrase that needs to be some kind of record) the simplest solution I could find was to create the with a view and then access it  with a URL to create the user, and then change the password ;)

Just one model to store the IPs by publishDate:

index which does nothing, one to add new IP addresses available via POST or GET requests, and one to redirect to the latest IP.

The Django Admin on AppFog doesn’t load the CSS from static files correctly I found a solution that is probably not the best but for such a small project, well it is OK. On the main urls.py: 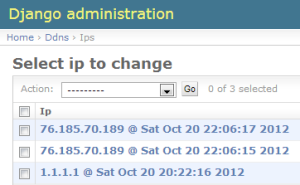 The other part is a python script which reads this page; a nice page that the people of whatismyip.com create to help automation processes like this one.

It makes a GET request to the Django app and also saves a file on Dropbox (before this I was using Dropbox as a temporally solution). All inside a while True with a sleep of 10 minutes.

Thats it! Now I can access my PC from daniel-pc.aws.af.cm - no DDoS please :P I want to look more other PaaS solutions, mainly OpenShift, more coming soon.

Complete code is on github.